Skip to content
You are here
Home > Music Blogs (Page 2)

The English pop rock band Bastille, which was formed in 2010, is known for its Indie pop or Alternative rock sound. Lately, Bastille has been taking over our radio stations and streams for the past couple months as their music develops a bigger following. Bastille has always had a significant sound and it is not missed in their new EP titled Goosebumps. A 5-track set, Goosebumps features three singles and two “One Eyed Jack’s Session”s. While on the shorter side, the album still contains tons of personality. Tracklist Goosebumps ft. Kenny BeatsSurvivin’WHAT YOU GONNA DO???Survin’ (One Eyed Jack’s Session)Goosebumps (One Eyed Jack’s Session) The first three tracks are familiar past singles, allowing the listener to immediately jam out to this EP. The last

Jordan Edward Benjamin, known in the alt world as Grandson, is a Canadian-American singer. Now with three full EP’s under his belt, his music has already become a staple in the Alternative world with roughly six million streams on Spotify monthly. His music touches base with a number of social issues from mental illness to social injustice. Tracklist Death Of An Optimist//IntroIn Over My HeadIdentityLeft BehindDirtyThe Ballad of G and X//InterludeWe Did It!!!WWIIIRiptidePain ShoppingDrop DeadWelcome to Paradise//Outro My first few encounters with this album left me with a feeling of discontent. I personally am a major fan of Grandson and was very excited for this new album to be released, but in the beginning while trying to explore the album's sound I wasn’t

The Arcs are a newer alternative band formed in 2015 by Dan Auerbach, the guitarist and vocalist of The Black Keys. This band became known as his “side project” with Auerbach describing it as “an American garage rock band”. They definitely have the staple alternative sound. This is their first released album, and it sets a high bar with their audience today. And with that said, this album is one of my all-time favorites. The album consists of 14 tracks, with the songs carrying you through a range of emotions as you listen (definitely an album you can cry to in the rain). Tracks Once We Begin (Intro)Outta My MindPut A Flower In Your PocketPistol Made Of BonesEverything You Do (you do

Ricky Montgomery made his official introduction to the music scene with Caught on the Moon, his debut EP, after gaining traction on the once popular (now dead) app Vine. After an overwhelmingly incredible response to this EP he took a huge leap of faith and wrote a full-length album. Montgomery Ricky was released in the late hours of March 31 about 45 minutes before originally promised, as an April Fools’ joke. Let's just say that this 2016 album did everything but disappoint with its incredible 10 songs, and it is picking up even more traction now in late 2020. Tracks 1. This December 2. Line Without a Hook 3. Cabo 4. Dont Know How 5. Last Night 6. California 7. My Heart Is Buried In Venice 8. Mr Loverman 9.

When I first listened to this album I thought it had a very early 2000s alternative sound with its more harsh vibe and tone. The album was released in 2014 by Dan Campbell who is the lead singer for the Pop Punk band The Wonder Years. Aaron West and The Roaring Twenties is to be considered Dan Campbell's solo project in which he goes into detail about the worst year of his life. The album was inspired by three tragic events of death and divorce that Campbell had to go through the previous year. I believe that this album really allowed him to tap into his emotions and grow as an artist, with it being some of his passionate work 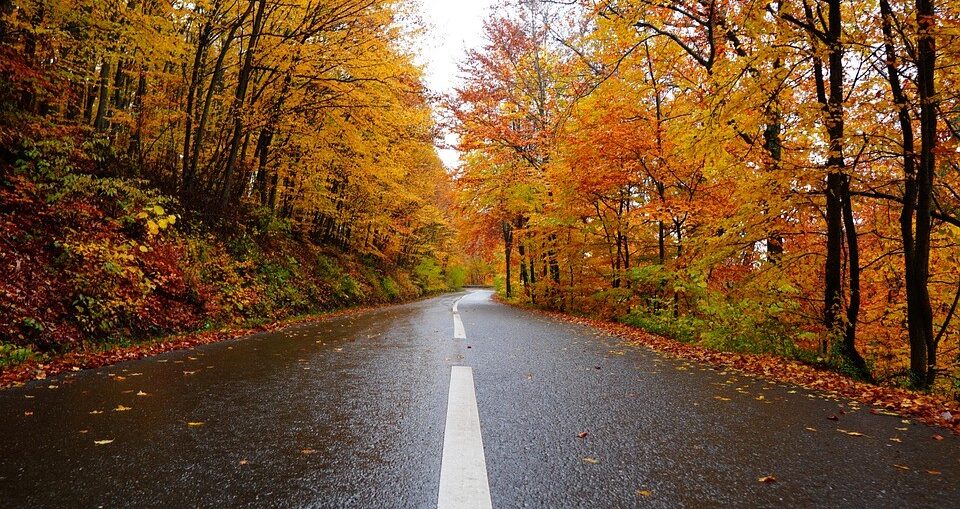 With sweet fall time in full swing and the holidays creeping up closer many people are starting to realize the fact that they will be doing a lot of traveling for the holidays or even just during fall time. With traveling comes long drives and/or flights. Spending this much time traveling there will inevitably be a lot of downtime and one of my favorite things to do when I have an abundance of downtime is to create the perfect playlist. Nothing makes traveling by yourself or with friends and family more fun than a playlist to go along with it. So for the upcoming travel and fall time being in full swing I created the perfect 'Fall Road Trip Playlist'.

As many Alternative Music followers already know, Machine Gun Kelly released his new album “Tickets to My Downfall” earlier this month. This album left many of his listeners awestruck. The more 00’s classic alternative sound really showed off his more “pop-punk” side. Many listeners say that the classic sound of the album made some nods to the early Blink-182 sound. While listening to this 15 track album many thoughts came to mind. I typically was not a huge fan of Machine Gun Kelly, I had listened to some of his stuff and never really had gotten into it. This album was completely different; as soon as I started it I immediately wanted to listen to the rest of it. First

Hozier’s self-titled album is his debut album released in September 2014 which reached commercial success almost immediately. Hozier was placed in the top ten lists in the UK, Ireland, Greece, Denmark, Australia, the U.S., and Canada. “Take Me to Church” which is the first song on the album has over 1.2 billion adds on Spotify. Over the years the album has gained critical acclaim and is debatably one of the most memorable Folk/ Blues albums of all time.  Hozier has always been a part of my music since I jumped into the Alternative music universe. The music videos for “Cherry Wine” and “Take Me to Church” are etched in my mind. They had such a strong impact on me for their

Classic Rock eventually evolved into Alternative Rock, but some bands didn’t get the memo. These bands show that even in 2020 Classic Rock still creeps out on top. These bands have similarities to popular bands of the 60s, 70s, and 80s. Whether you’re a fan of the old music or the new music you’ll love these artists! The Struts Not only have they opened for The Who and The Rolling Stones, but The Struts are also a four-piece UK-based band just like many Classic Rock bands before them. I wouldn’t know how else to describe their sound but new Classic Rock. Their most well-known song “Could Have Been Me” went viral and appeared in the top 5 on the U.S. Alternative and

The latest album from the psychedelic pop band Glass Animals is suitably called Dreamland. Not only is “Dreamland” one of the most impactful songs on the album, but the whole sound of the album gives that feeling of a dreamland. The psychedelic sound mixed with Dave Bayley’s unique indie rock voice makes such an incredible album to experience. The way that each song melts into the other with the use of the short “home movie” breaks. It makes the album have such a personal feel like a dive into the childhood of Bayley. The flow gives album vinyl playability. Dreamland is an amazing album to just let go of the world for a moment and really listen to it.  I recommend

National Blame Someone Else Day Giveaway

I would def want to read minds. Imagine all the st

Tune in to 95.7 The Spin to hear this weeks new mu

good morning everyone and happy saturday!!! what f

I love a good road trip, but I like flying in plan

This is a really difficult one.... probably "Prett

Happy Father's Day to all of the Dad's out there!!

I really want to go scuba diving!! What about you

Hmmmm this is a hard one... Maybe Ella Fitzgerald?